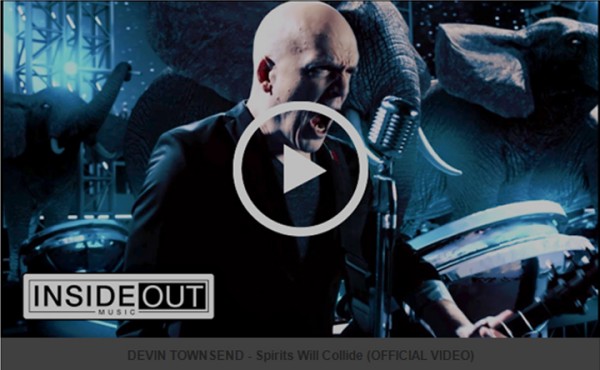 Canadian heavy music artist Devin Townsend releases his new album ‘EMPATH’ today, and to coincide with that, the epic video for ‘Spirits Will Collide’ has been launched. Watch the video here: https://youtu.be/AdHJurX0yVA

Devin comments: “Here is the video for my Enya influenced, 'commercial' song. I love this type of mid-tempo, big, romantic heavy music. I would love to do a full album in this style somewhere down the line, and it’s the only one of its kind on the Empath record.

'Spirits Will Collide' as a song is pretty standard fare for me if you've followed what I’ve done over the past few years. It’s ultimately an 'anti-suicide' statement and it’s meant to be melodic and straightforward. A video with CGI Gorillas playing bass and Elephants playing drums in front of a billion people is so ridiculously dumb that I’m surprised it makes me feel as happy as it does, but the theme of the song is essentially about trying to convince kids or teens to 'hang on' when they feel depression or suicidal thoughts. The story of the video is that a kid that has a fantasy about playing at a massive concert with thousands of people as a choir, animals etc...just the biggest concert he can imagine, and the strength of the sound and the intention of a bunch of people singing together is such that the sound blows away the darkness.

It’s admittedly a bit ridiculous, but I guess in a way I feel that beauty is much harder to be expressed quietly in this day and age, so the video is about saying it louder than ANYTHING. Without a multi-million dollar budget, it was hard to do. However, Kudos to iCode Team and the hundreds of extras for really pulling this out on a shoestring budget, I think it gets the point across.

The only thing I would say that if I was a kid imagining playing the universes biggest concert, I would have added a full head of hair in there for good measure =)”