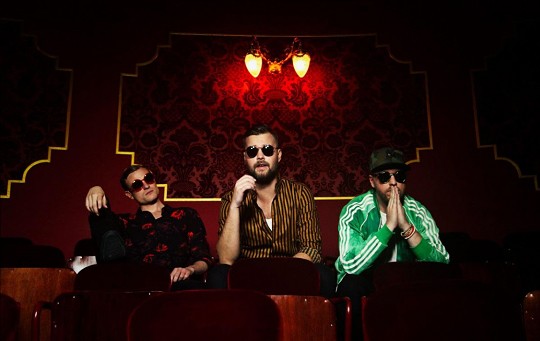 Swedish alternative rockers PORT NOIR are set to release their new album, ‘The New Routine’ on the 10th May 2019, their first for InsideOutMusic and the beginning of a new sound for the band.

Today they are pleased to launch the latest single, ‘Champagne’, the third track to be taken from the album. Watch the lyric video here: https://youtu.be/thi2YpAhKgw

The band comments: “For a long time we've been wanting to do something in the way of Zack de la Rocha and Jon Theodore's project One Day as a Lion. Confident and powerful yet minimalistic with distorted analog synthesizers and pushy drums taking the lead role. However, we wanted to change things up with some melodic vocals and do our own thing. We believe we created something unique with ‘Champagne’ and it is just what this scene needs.”

The band recently launched a video for the track ‘Young Bloods’. Watch the video here: https://youtu.be/57iP20jBEh8

The new album sees the trio blending old-school rock with contemporary pop, R&B and hip-hop in a creative and minimalistic fashion. Inspired by bands such as Rage Against the Machine, Death from Above 1979, The Weeknd, Daft Punk, Queens of the Stone Age, ‘The New Routine’ is direct, energetic and intense.

‘The New Routine’ will be available as CD, LP + CD

Consisting of Love Andersson (bass, vocals), AW Wiberg (drums) and Andreas Hollstrand (guitar, keys and backing vocals) they’re a band that’s been around since 2011. During the years they’ve toured and played extensively through Europe supporting In Flames, Pain of Salvation, and Karnivool to name a few.

Their last album ‘Any Way The Wind Carries’ was released in 2016, with Metal Hammer UK commenting that it combined “aching melody with shuddering depth.” Recorded with Daniel Bergstrand, at a small mountain village in southern Spain instead of their native Sweden, ‘Any Way the Wind Carries’ was another bold statement from a band that defies pigeonholing in favour of embracing a vast array of influences and distilling these into smartly arranged, concise songs.