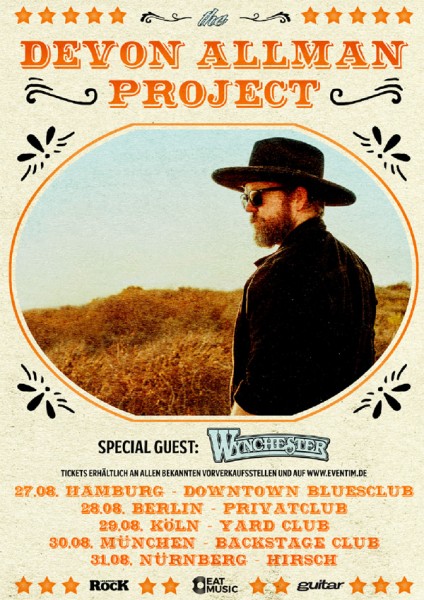 When your surname is synonymous with one of the most revered forebears of seminal Southern Rock as well as archetypical Americana, it’s incumbent on you to honor that legacy and the music on which it was built. It’s little wonder then that Devon Allman, son of the late Gregg Allman (Allman Brothers) and an accomplished singer, songwriter and guitarist in his own right, should opt to launch a new band along with a series of high profile performances, the latest chapters in an already storied solo career.

Allman, the former lynchpin behind such bands as the Royal Southern Brotherhood and Honeytribe, has assembled The Devon Allman Project, a sixpiece ensemble featuring a percussionist/multi instrumentalist, a Hammond B3 player, and an additional guitarist. The kick-off with special guest Duane Betts at the Fillmore show on December 8th will feature appearances by Luther and Cody Dickinson (of North Mississippi All-Stars), Peter Levin (Gregg Allman Band, Blind Boys of Alabama, CSN, Doobie’s etc.), Samantha Fish, Jimmy Hall (Wet Willie, Jeff Beck, Hank Williams Jr.) and Bobby Whitlock (Derek & The Dominos, Dr. John, Rolling Stones etc.) and longtime Gregg Allman keyboardist, Peter Levin, will act as the musical director. Other artists tba. Coming off a series of prestigious appearances -- an all-star tribute to his father and Allman Brothers drummer Butch Trucks at the Allmans’ own Peachfest, a special celebration at the Grammy Museum in L.A., an emotional return to his father’s hometown, Macon Georgia, where he accepted the key to the city on the elder Allman’s behalf, and an upcoming event at the Americana Music Fest featuring Buddy Miller, Joan Osborne, and John Paul White -- The Devon Allman Project will kick off their 2018 tour with an upcoming show on December 8th at the iconic Fillmore in San Francisco.

In addition to a several other shows taking place at in the early months of 2018, the group headlines the Florida Jazz & Blues Jam in Boca Raton Florida on January

A series of lengthy accomplishments have entitled Devon to take his own place in the Southern Rock pantheon. His remarkable resume spans almost two decades, from his post-millennial breakout with Honeytribe, and the widely revered super group Royal Southern Brotherhood. Devon has also had occasion to jam with the greats such as Billy Gibbons of ZZ Top, Mr. Les Paul, Keith Urban, Gov’t Mule and Lynyrd Skynyrd just to name a few. Through his run of successful solo albums, “Turquoise” was highly regarded by USA Today, “Turquoise is reflective and soulful” while “Ride or Die” hit #1 on the Billboard Blues Charts. Devon is also a contributing writer to Guitar Player Magazine as well as serving on the Board of Directors for the National Blues Museum in St. Louis, Missouri.