DEVIN TOWNSENDPROJECT released a new live video of "Ocean Machine – Live at the Ancient Roman Theatre" which is out now! 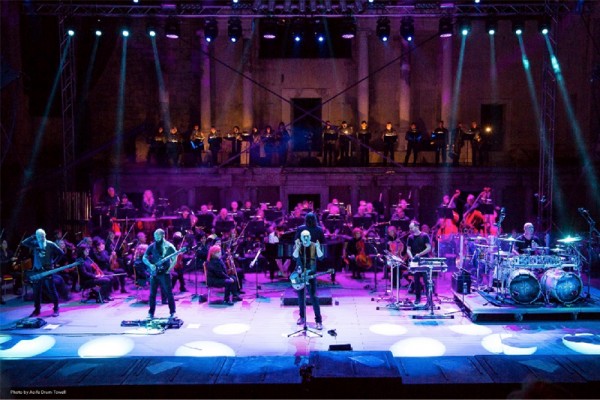 On the 22nd September 2017, Devin Townsend Project played a special show at the Ancient Roman Theatre in Plovdiv, Bulgaria, celebrating the 20th anniversary of the landmark Ocean Machine album in full, as well as a set of fan-requested tracks alongside the Orchestra of Plovdiv State Opera. This concert was filmed, and today it sees its release as ‘Ocean Machine – Live at the Ancient Roman Theatre Plovdiv’.

To celebrate, a video clip of the band performing ‘By Your Command’, alongside the orchestra, can be seen here: https://youtu.be/TDP6gNR9fAA

“Hey there, Devin T here, taking a second to bring myself up for air from writing :)

After a long and arduous process, the concert myself and the DTP performed in Plovdiv Bulgaria is finished.

I am very proud of this release and it represents a culmination of many years of material. The concert actually is in two parts, with Ocean Machine being the second. It was a fantastic night and an unforgettable experience with the die-hards travelling from all around the world to be there with us.

As I move into the next phase of my life and career, this live in Bulgaria DVD stands as a monument for me, and what we achieved with the DTP.

As always, words fail me when it comes to expressing what the support of the audience means, but I thank you and everyone involved for allowing this to happen.