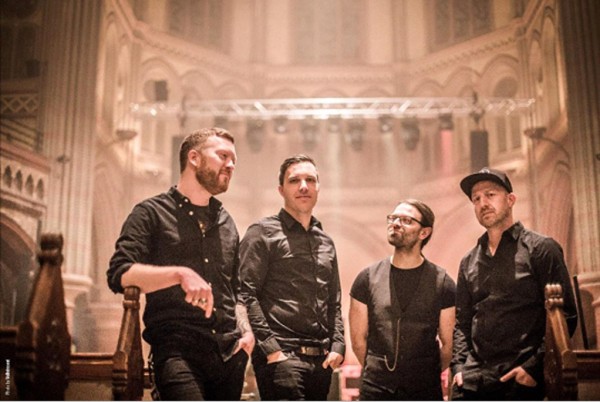 German instrumental-rock group LONG DISTANCE CALLING recently announced their first ever live album ‘STUMMFILM – Live from Hamburg (A Seats & Sounds Show)’, scheduled for release on the 1st November 2019 through InsideOutMusic. Filmed during a special run of dates in early 2019, it saw the band performing seated shows in some very special locations for a stunning audio-visual experience.
Now the band are pleased to launch the third clip from the album, for the track ‘Metulsky Curse Revisited’.

The band comments: “We are happy to present you 'Metulsky Curse Revisited', the third single and video from 'STUMMFILM  - Live From Hamburg'.

Over the years, this song has become an integral and important part of our live sets, it´s the perfect ending for our shows. It´s always a pleasure to play it live and to see the reactions of the audience. Fun fact: the first version of this song was one of the songs from our first demo, which didn´t make it on our debut album. When we did a split EP with Leech a couple of months later, we decided to pick up this song again and rearrange / rewrite it which happened on a single afternoon, it was kind of magical. It´s definitely one of our best songs and a fan favorite so we hope you will enjoy the live version as much as we do. LOVE LDC”

The band will give a special performance for their exclusive record release show at GOLDEN SILENCE FESTIVAL on November 2nd in Münster / Skaters Palace.

The band previously commented of the live album: “We are happy to unveil our first ever live album ‘STUMMFILM – Live From Hamburg’ which we recorded on the ‘Seats & Sounds’ tour earlier this year. After more than ten years on the road, we felt it’s more than about time to do a proper live album. We are very satisfied with the result, a lot of atmosphere, energy as well as some nice surprises have been captured at Kulturkirche Altona in Hamburg. We can’t wait to share this beautiful experience with you! Love LDC”

For 13 years now, the Münster-based four-piece Long Distance Calling has been famed and cherished for its weightless yet massive music. After having returned to their instrumental roots Long Distance Calling sat down to carefully ponder their next step. When they got up again, they were ready for their most extraordinary live undertaking yet: Aptly entitled “Seats & Sounds”, this string of concerts saw Long Distance Calling take to the stage in very special locations in front on a seated audience.

The band took the matter almost religiously and went to great lengths in pulling off their most daring effort. “We wanted to go one step further, highlighting the audio-visual quality of the band for the very first time”, the band states, referring to the phalanx of video screens and specially curated visuals corresponding to each song.

One of those rare performances, the one at the Kulturkirche Altona in Hamburg, was captured on film and tape and is now being released. More an elegant silent film (visually speaking) than an ordinary live video, Long Distance Calling deliver a stunning performance in two acts: A “normal” Long Distance Calling set with songs from all their albums, and a special ‘Avoid the Light’ set, performing the dramatic album almost in its entirety. “This is one of the most important releases of our entire career”, the band continues, “and playing it felt like time travel.”

Meticulously prepared and rehearsed, this is Long Distance Calling on another level. Backed by guest musicians Luca Gilles on cello and Aaron Schrade on percussion and electronic beats, the experimental rock veterans show their grandeur in cinemascope – elaborately filmed and monumentally staged. In the end, Janosch Rathmer (drums), Jan Hoffmann (bass), Florian Füntmann (guitar) and David Jordan (guitar) not only played their biggest Hamburg headlining show; they also peaked their stellar career. 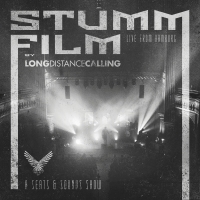