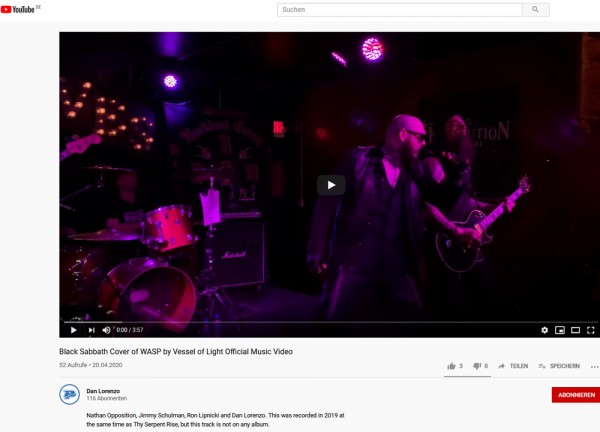 Thanks to the CCP it looks like we're not going to be allowed to play the shows we had scheduled in June.

I've written the music to 15 new songs for the 4th VESSEL OF LIGHT album and recorded my guitar parts to 11 of them.

Starting with Woodshed and since then, I've records all my guitars first as opposed to the old days when everything started with the drums and a rhythm guitar scratch track. Ron Lipnicki has already tracked drums to six songs and Nathan is well on his way to writing/recording his melody and lyrics. Jimmy Schulman will record bass in June and we should have the whole thing finished by the Fall.

We are speaking with three labels about releasing our 4th album on vinyl and CD.

Until then I wanted to release something now and so I had Jason Stewart put together a video for our Black Sabbath cover of Wasp which is not available elsewhere.

Jason also edited a cool 3 camera shoot of our last show in early March, back in the days we were allowed to have fun.

He also made a great interview with Nathan and soon will finish a long interview with me, guitar in hand discussing my riffs in Hades, Non-Fiction, The Cursed ( my project with Bobby Blitz) and of course Vessel of Light.

All of the above can be found on my YouTube page.