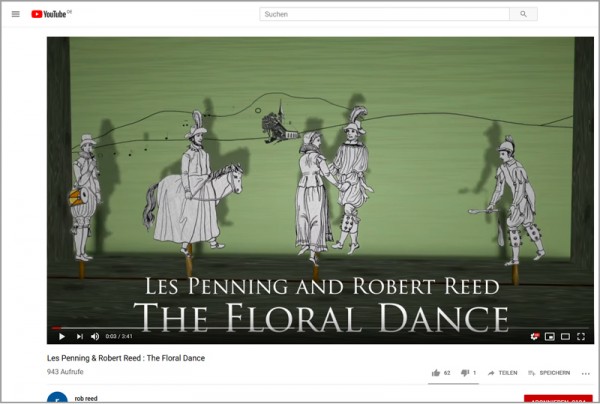 Rob Reed and Les Penning will release a new EP featuring an instrumental cover of the well-known folk song The Floral Dance.

Here comes the link to the promotional video: https://youtu.be/EG-NaWehAkU

Written in 1911 by singer and composer Katie Moss, the song, which lyrically tells the story of the Cornish Helston Furry Dance. The song was made popular by the Brighouse And Rastrick Brass Band who reached No.2 in the UK charts in1977 and then by Terry Wogan who recorded a vocal version which reached No. 21 a year later.

"I remember hearing Terry Wogan signing along to the instrumental version which was a hit back in 1978," Reed tells Prog. "I was speaking to Les about doing a Summer single, after our successful Christmas single last year, which reached number three in vinyl charts. We had a few songs in mind, but as soon as I head Les playing this tune, we both knew that it was perfect. We really had fun recording the EP, especially the bonus arrangement of the title track, which owes a lot to Viv Stanshall, and Monty Python.”

“The tune and words of The Floral Dance come from composer, Kate Emily Moss who, in 1911,visited Helston in Cornwall and joined in their annual celebration to banish Winter and welcome in the Summer on Flora Day," explains Penning. "She took part of the chorus of the town’s 'Furry Dance' and created an expanded version complete with her own words. Down the years it has generated numerous recordings. We believe we have managed to bring something original to the uplifting tune.”

The EP contains five brand new recordings, including a new arrangement of Wrekorder Wrondo, originally recorded by Les back in 1978 with Mike Oldfield. The title track is exclusive to the EP and will not feature on Les' forthcoming new album to be released in October to co-inside with two sold out concerts at the legendary Penhros Court in Herefordfordshire, where Les and Mike Oldfield used to perform unnoticed most nights during the making the classic Ommadawn album.